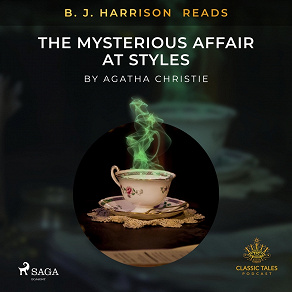 B. J. Harrison Reads The Mysterious Affair at Styles

by Agatha Christie
The soldier Hastings is sent home from the First World War. He is invited to his friend Cavendish’s house but it does not take a lot of time before Hastings notices some strange occurrences at Styles Court. The situation escalates when Cavendish’s step-mother is found poisoned. The family reaches out to a detective for help. This is Hercule Poirot very first appearance in Agatha Christie’s novels. What will Poirot’s investigations lead to and will his first crime case be solved?
Find out the answers in "The Mysterious Affair at Styles".

Agatha Christie was an English writer who lived in the period 1890-1976. She is best known with her detective novels and short stories such as "Murder on the Links", "The Mystery of the Blue Jar", "And Then There Were None". The recipe for a great Agatha Christie novel is a smart detective, a series of clues, some suspects, a long expected solution, suspense and plotting. However she was implying that human’s nature is for the most part the same no matter what the case is. This is also the path that her main characters Lady Marple and detective Poirot followed in many of their investigation cases.
Agatha Christie, called by many "Queen of Crime" or "Queen of Mystery", is the best-selling author of all times. One can only find out why after embarking on an exciting and thrilling journey through her works.