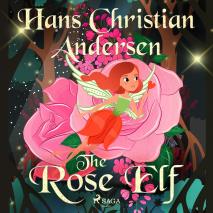 by Hans Christian Andersen
In the rose bush in the middle of the garden lived a tiny elf, she was so small that it was impossible to see her with the naked eye. Behind each rose petal hides a room and the elf spent her days exploring the garden. At the bottom of the garden was a house where one day she saw a charming young woman, her lover and her evil brother. The tiny elf then found herself in the front row of a drama that would leave no one indifferent.