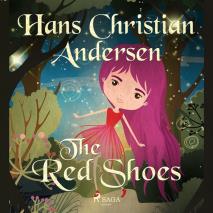 by Hans Christian Andersen
There was once a poor little girl called Karen. In summer, she walked barefoot and in winter, she wore clogs that hurt her feet. She had no choice, it was all she had. Dame Shoemaker wanted to help her and sewed, as best she could, a pair of red shoes. When she wore them for the first time, Karen’s life took an unexpected turn.