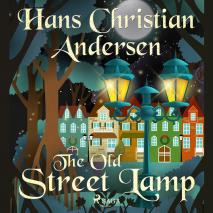 by Hans Christian Andersen
An old street lamp is at the end of its working life. It has had a long life and lots of people know it. So, friends come to visit on its last night on the job.