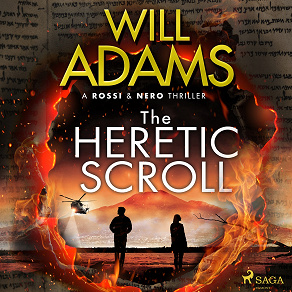 by Will Adams
Above Naples, Vesuvius is heating up once again...

An absolutely gripping thriller from bestseller Will Adams.
Archaeologist Carmen Nero and former conman Cesco Rossi are in Herculaneum on the trail of the lost texts of Ancient Rome, possibly stored deep underground in the Villa of the Papyri.

But when there is a terrible murder, they realise that powerful forces are interested in the excavations of the villa which threaten the foundations of the Church. With neo-Nazis on Rossi’s tail and a traitor in their midst, everything hangs in the balance.

As the great volcano rumbles, they are in a race against time: to find the killer, uncover the truth behind the lost manuscripts, and to save themselves from complete destruction...

The next scintillating installment in the Rossi & Nero thriller series, perfect for fans of Chris Kuzneski, Dan Brown and Scott Mariani.

Will Adams is the author of a number of acclaimed adventure thrillers, including the Daniel Knox series, in which the underwater archaeologist hero explores some of the great mysteries of the ancient world.

His novels have been published in over twenty different languages. He writes full-time and lives in Suffolk.
Listen to sample
Log in to borrow