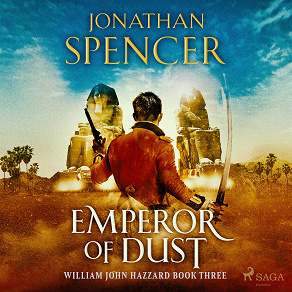 by Jonathan Spencer
The sands of Egypt carry whispers of rebellion...

Egypt, September 1798. After tragedy at the Battle of the Nile, Hazzard is possessed by a dark vengeance: with the marines of 9 Company and their Bedouin allies he scours the Nile Delta for his enemy, the French spy-catcher Citizen Derrien.

However, among the sacred ibis and ever-shifting sands, Hazzard catches wind of something far more deadly: the stirrings of revolt in Cairo, the outbreak of plague, and the cold hand of Admiralty Intelligence. When riot explodes in the capital, Hazzard fears he is simply too late.

Abandoned by the French Government, Napoleon and his army are now trapped in Egypt. When Bonaparte discovers that Al-Djezzar ‘the Butcher’ of Acre is gathering his forces to attack, he accepts the challenge.

Riding with the Mamluk and the beautiful Shajar al-Durr, Hazzard engages French cavalry in the shadow of Ozymandias in ancient Thebes – and the Admiralty calls upon him once more as Napoleon launches his bloody crusade on Syria and the Holy Land to become the new Emperor in the East.

From flaming battle at sea with the blockade fleet to massacre at the walls of Jaffa and Acre, this is Napoleon’s desperate bid to seize the Orient – and the next explosive chapter of the French occupation of Egypt.

Perfect for fans of Bernard Cornwell, Simon Scarrow and Seth Hunter.
In the words of J.D. Davies this is the follow-up to a "Hornblower meets Mission: Impossible" storyline.

Jonathan Spencer is from south-east London, the great-grandson of a clipper-ship captain who brought tea from China. He served in the Canadian army, studied ancient and modern history, and has lectured at universities and private associations on the subject of Napoleonic Egypt. He writes historical non-fiction under the name Jonathan Downs, his major work a revised account of the British acquisition of the Rosetta Stone, Discovery at Rosetta, (London 2008; Cairo 2020). He speaks several languages, has trained with the former Russian National fencing coach, and has lived and worked abroad all his life. He currently lives in the Western Cape in South Africa.
Listen to sample
Log in to borrow