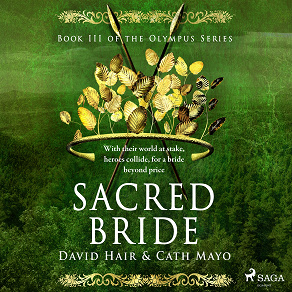 Prince Odysseus and the daemon Bria must penetrate the haunted caverns beneath Dodona, seeking a way to save their doomed nation, Achaea, from the might of Troy.

The startling revelation that follows will set Odysseus on his most daunting mission yet, as he seeks to reunite the divided Achaean kingdoms before the rapacious Trojans strike. His journey will pit him against wrathful gods and legendary heroes, in a deadly contest for the hand of Helen of Sparta, the daughter of Zeus, upon whose choice the fate of Achaea rests...

Sacred Bride, the third stunning novel in the Olympus Series, is perfect for fans of David Gemmell and Madeline Miller.

David Hair is an award-winning New Zealand YA and Adult fantasy writer, and the author of sixteen novels. He's joined his considerable skill and expertise with Cath Mayo to create the Olympus Series, an adult historical fantasy drawing on ancient Greek Mythology, following the adventures of Odysseus as he navigates the dangerous world of the Greek Gods.


Cath Mayo is a New Zealand YA, Children and Adult fiction author. Her two published YA historical novels are both set in Ancient Greece and her first novel received a Storylines Notable Book Award for Young Adult Fiction in 2014. She's joined her considerable skill and expertise with David Hair to create the Olympus Series, an adult historical fantasy drawing on ancient Greek Mythology, following the adventures of Odysseus as he navigates the dangerous world of the Greek Gods.
Listen to sample
Log in to borrow