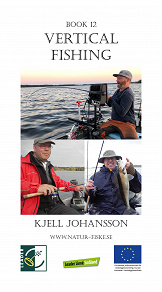 This book is part 12 (of 15) in the natur-fiske series. A complete guide to fishing and spending a nature holiday in Sweden.

In my (printed) book "Exciting methods for pike, zander and perch" the big news was the detailed chapter on vertical fishing, a method that struck like a bomb in sport fishing-Sweden in 2007. Many who used trolling and spin fishing changed methods and there was a vertical boom / zander boom that changed fishing significantly. I was involved from the beginning and in this book the different variants of vertical fishing that arose in the wake of the introduction in Sweden are described.

I call the primary method "traditional" and I describe my days fishing with the guy who introduced the method, Jörgen Larsson, and two fishing guides in the Netherlands.

Fireball, which is vertical fishing with natural bait, is the second method described.

The method I launched in the book "Exciting…" and which I still use, drift fishing, is described carefully, as is the description of how you can fish vertically with simpler equipment, "Everyman’s Vertical Fishing".

The method that displaced the traditional method and became very popular, is also included, of course. It is called pelagic vertical fishing, which targets the larger predatory fish, mostly zander. Many large fish have been lured to bite with this spectacular method which relies on an essential tool, the fishfinder.