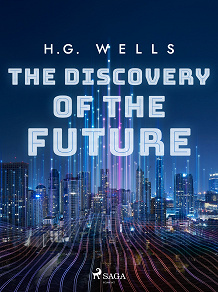 The Discovery of the Future

by H. G. Wells
‘The Discovery of the Future’ is a compelling lecture by H.G. Wells arguing for the greater predictability of the future due to science. Following the incredible success of ‘Anticipations’, Wells once again expresses his firm belief in the future as ‘the promise of greater things’. Using scientific approaches and describing various working methods, Wells elaborates on how humanity can predict the future by focusing on general and not individual beliefs. Wells’ innovative lecture was originally met with great acclaim and the principle of predicting events due to general causes is still used in political and economic studies today. ‘The Discovery of the Future’ is an interesting read for fans of Wells’ novels as it portrays his unique futuristic beliefs that influenced his celebrated science-fiction stories.

H. G. Wells (1866-1946) was a celebrated English writer, remembered mostly for his science fiction works. Often described as a futurist, H. G. Wells’ influence cannot be overstated for his works foresaw many technological innovations such as space travel, the atomic bomb, and the Internet. A four-time Nobel Prize in Literature nominee, Wells explored a wide array of themes in his works, from religion to social criticism and beyond. Some of his best works include the time-travel novel ‘The Time Machine’, the sci-fi adventure novel ‘The Island of Dr. Moreau’, and the mankind-versus-aliens novel ‘The War of the Worlds’. Wells occupies one of the central seats in the canon of science-fiction literature and his writing inspired other celebrated authors such as Ray Bradbury and Philip K. Dick. Wells’ stories are still widely read to this day and have had numerous cinematic adaptations including ‘The Invisible Man’ starring Elisabeth Moss.