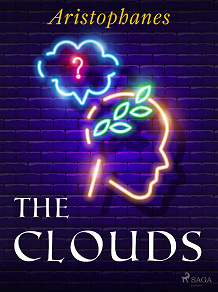 by Aristophanes
‘The Clouds’ is a comedic attack on the qualities of virtue and excellence, as espoused by Sophist philosophers. The central figure, Strepsiades, enrols his dissolute son, Pheidippides, into ‘The Thinkery’, run by none other than the famous philosopher, Socrates. However, Pheidippides’ training takes an unexpected turn and Strepsaides lays the blame firmly at Socrates’ feet. Although many of the jokes are of their time, the themes running through this play are timeless.

Aristophanes (450BCE – 388BCE) was a playwright from Ancient Greece. While the plays of the time tend to focus on tragedy, Aristophanes chose comedy through which to criticise culture, society, and politics. Much of his humour was deemed to be immodest, utilising elements of burlesque and mime, alongside searing diatribes to make a variety of important points. His style has influenced many modern films, including ‘Chi-Raq,’ directed by Spike Lee.