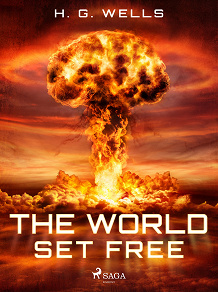 by H. G. Wells
‘The power to destroy, was continually increasing. There was no increase whatever in the ability to escape’. H.G. Wells creates a hauntingly prophetic narrative of the upcoming atomic era in his acclaimed science-fiction novel ‘The World Set Free’. In this nightmarish book, global leaders must create an atomic bomb that can annihilate society to save the world. In a highly prescient and unique manner, Wells wonders if peace can only be achieved by first having the ability to bring about total destruction. ‘The World Set Free’ is a novel as thrilling as it is terrifying as global warfare threatens to end civilisation completely. A highly influential novel that remains relevant in modern times, ‘The World Set Free’ is one of Wells’ best and should be read by anyone interested in warfare.

H. G. Wells (1866-1946) was a celebrated English writer, remembered mostly for his science fiction works. Often described as a futurist, H. G. Wells’ influence cannot be overstated for his works foresaw many technological innovations such as space travel, the atomic bomb, and the Internet. A four-time Nobel Prize in Literature nominee, Wells explored a wide array of themes in his works, from religion to social criticism and beyond. Some of his best works include the time-travel novel ‘The Time Machine’, the sci-fi adventure novel ‘The Island of Dr. Moreau’, and the mankind-versus-aliens novel ‘The War of the Worlds’. Wells occupies one of the central seats in the canon of science-fiction literature and his writing inspired other celebrated authors such as Ray Bradbury and Philip K. Dick. Wells’ stories are still widely read to this day and have had numerous cinematic adaptations including ‘The Invisible Man’ starring Elisabeth Moss.