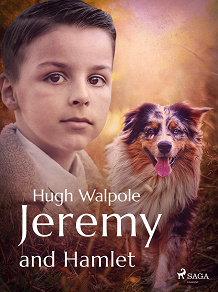 by Hugh Walpole
The second in the ‘Jeremy’ series, ‘Jeremy and Hamlet’ switches between two perspectives: those of our 10-year-old hero and those of his dog, Hamlet. With Jeremy away at school, Hamlet must get through each day without his human best friend. Similarly, Jeremy is pitted against the problems that only school can throw at you. A funny and fascinating read, ‘Jeremy and Hamlet’ is an ideal read for Walpole fans of all ages.

Hugh Walpole (1884 – 1941) was one of Britain’s most prolific and popular novelists. Although originally destined for a career in the church, Walpole found himself drawn to writing. During his career, Walpole wrote 36 novels, five compendiums of short stories, three sets of memoirs, and two plays. He is most famous for ‘Rogue Herries,’ ‘A Prayer for my Son,’ and ‘The Story of Dolittle,’ which was adapted for the silver screen, and starred Robert Downey Junior.