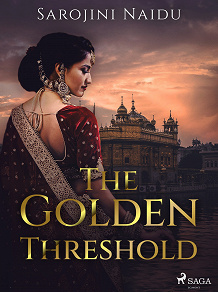 by Sarojini Naidu
She was the 'Nightingale of India', and her voice was first heard in 1905 when 'The Golden Threshold' was published.<br><br>This collection of Sarojini Naidu's early work is already infused with the rich imagery and lush descriptions of India that she was known for. <br><br>Borrowing from the tradition of British Romanticism, the works are largely lyric poetry. But never mind the style, it is the substance that counts.<br><br>A rich range of content includes songs for music, folk songs and poems, all opening a window and allowing the scents and sounds of early-20th century India to blow in.<br><br>Evocative, educational, imaginative, charming...this is ideal for fans of Arundhati Roy's 'The God of Small Things' and the poetry of Daljit Nagra.<br><br>Sarojini Naidu (1879-1949) was an Indian poet and political activist.<br>She was educated in Madras, London and Cambridge, where she took up the cause of women's suffrage.<br><br>Back in India, she became a leading figure in India's struggle for independence from colonial rule.<br>Her poetry, which was vivid, colourful, evocative and challenging, earned her the title 'The Nightingale of India'.<br><br>In 1925 Naidu was made president of the Indian National Congress and in 1947 was appointed Governor of the United Provinces.