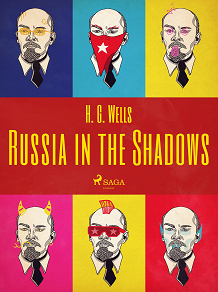 Russia in the Shadows

by H. G. Wells
When H.G. Wells came face to face with Lenin.

In 1920, world famous writer H.G. Wells was invited on a trip to Russia. A committed socialist, Wells had high hopes for the Bolsheviks. What he found was a country ravaged by revolutions and civil war. Despite this, he still held out hope for the future—an optimism which would prove to be very misplaced. The highlight of the trip came when he met with Vladimir Lenin, or as Wells described him, "the little figure at the great desk".

"Russia in the Shadows" is a fascinating document of Wells’ trip, and a great read for any history buffs.

H.G. Wells (1866–1946) was an English author often called the "father of science fiction". His work popularised some of the genre’s most abiding concepts, such as time travel and parallel universes, while also exploring social issues of the day. Among his most famous books are "The Time Machine", "The Island of Doctor Moreau", "The Invisible Man" and "The First Men in the Moon".

Wells was also one of the first writers to imagine an alien invasion. In "The War of the Worlds" he depicts a devastating attack by Martians, who stalk the earth in huge metal tripods. Orson Welles famously created an American radio version in the 1930s, panicking some listeners who thought it was a real news bulletin. The book has been adapted for the screen many times, including a movie starring Tom Cruise and a BBC television series.