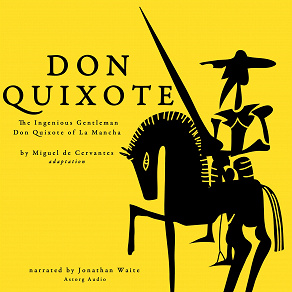 by Miguel de Cervantès
The Ingenious Gentleman Don Quixote of La Mancha, or more simply Don Quixote, is one of the most influential works of literature from a Spanish author. It is one of the earliest canonical novels, and is regularly cited as the best work of fiction ever published. A nameless hidalgo read so many chivalric romances that he loses his sanity and decides to set out into the world as a knight, to bring justice under the name Don Quixote. The delusional hidalgo then recruits a simple farmer, Sancho Panza, whose unique wit proves a marvelous addition to Don Quixote's idealistic bouts. This audio edition of a literary masterpiece brings you one of the funniest and most profound texts ever written, in a convenient format.

Don Quixote has been portrayed on screen many times, including most recently in Terry Gilliam's spoof movie 'The Man Who Killed Don Quixote', starring Adam Driver and Stellan Skarsgard. In 2000, John Lithgow, Bob Hoskins and Isabella Rossellini starred in 'Don Quixote'.

Miguel de Cervantes Saavedra (1547-1616) was a Spanish writer whose epic novel 'Don Quixote' made his name.
The story is regarded as the first modern novel and one of the greatest books of all time.
As is often the case with writers and artists of his time, Cervantes spent most of his life in poverty.
He left Spain for Rome in 1569 to work for a cardinal, before joining the Spanish Navy, being badly wounded in 1571, then being captured by Barbary pirates and held for five years before being ransomed.
He worked as a purchasing agent, then a tax collector, and his first novel, 'La Galatea', was published in 1585.
His other works included '12 Exemplary Novels', 'The Travails of Persiles and Sigismunda' and the epic poem 'Journey to Parnassus'.
'Don Quixote' was published in two parts, in 1605 and 1615.
Listen to sample
Log in to borrow